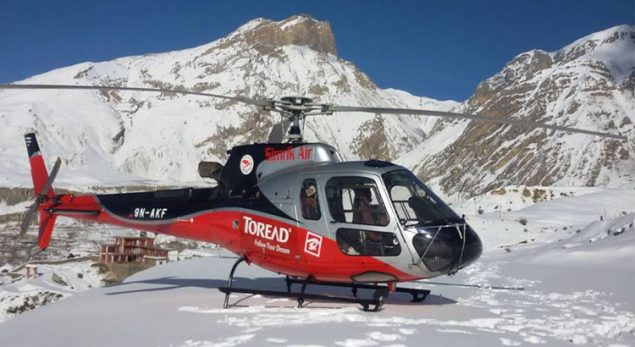 Annapurna base camp helicopter landing tour starts and ends in Pokhara. Pokhara is a beautiful nature city of Nepal. It is a neat and clean city without any air pollution. It is full of beautiful lakes, green hills and the high Himalayas. Pokhara is the only place where no particular point is necessary to see the mountains.

7:30 AM: Take a boarding pass and fly to Annapurna base camp.

8:30 AM: Fly back and land at the Pokhara airport.

9:00 AM: Pick up you from the airport and transfer your hotel into Pokhara.

Receive you at your hotel at around 6:00 AM in the morning to Pokhara Airport. From there, you will board the helicopter which takes around 40 minutes to reach Annapurna Base Camp. You will have 20 to 30 minutes time at Annapurna Base Camp for the photograph and to enjoy the magificient view of Mount Annapurna, Fishtail and other surrounding mountains with Annapurna Himalayan glacier.

Model of Helicopters for Annapurna base camp helicopter tour

Annapurna Base Camp Landing Helicopter tour can be done all around the year except the monsoon period of July to Mid September the wet and rainy months, with clouds blocking the views and making Helicopter flight least possible to land and fly.

March to May warm during the day, morning and late afternoon can be little cooler where morning is clear for the views and Heli flights.

October to January and February will be clear with fine weather but can be much colder during morning and afternoon time as well in shady areas.

March to May is also a flowering time on mid hills of Annapurna Himalaya region where the whole areas turn blazing with rhododendron which is national flower of Nepal.

Late November to Mid February mostly clear during the day, but the days are short with sunlight in Autumn / Fall and Winter times, morning and late afternoon can be cold of less than -5° to -10° Celsius with the maximum of 15° to 20° Celsius in sunny days and afternoon

Cost for a day Annapurna Base Camp Helicopter Tour

You will keep following things to prepare Annapurna base camp helicopter tour:
Small day pack
Sun Hat and Sunglasses.
Sunscreen and body lotion
Some snacks or chocolates
Cameras and it’s batteries
Down jacket and trousers

How long is the ride from Pokhara to Annapurna base camp?

Straight-away without stops on route takes not more than half an hour or less, depending upon the pilot's decision and weather wise also.

How many people will be in a chopper?

For group joining with maximum 5-6 person seating arrangement, where Helicopter will fly with minimum of 01 to 03 persons, where one can charter helicopter for own comfort.

What is the distance from Pokhara to Annapurna base camp?

As crow fly or aeronautical miles it is less than 40 k.m. or approx: 35 k.m air distance straight to Annapurna base camp from Pokhara.

How many pilots fly the helicopter?

Depending upon altitude wise, normally with two captain (lead pilot) and co-pilot seated next each other. But sometimes with only one pilot that is the Captain where some passenger can seat in the front to enjoy more views during the flight.

How long is the stop at Annapurna Base Camp?

Depending upon weather and Captain probably not more than half an hour (30 minutes) on a clear fine morning, where heavy wind current might affect the flight, depending upon pilot and weather-wise and snow level on landing spot at Annapurna Base Camp.

How high is Annapurna base camp and main Annapurna peaks?

How long Does it take to reach Annapurna base camp from Kathmandu?

Is it possible to join your company for Annapurna Base Camp?

What is a weight limit for the Annapurna base camp helicopter tour?

How do I book Mount Annapurna base camp helicopter tour with your company?

It is easy, you can book with us directly, we need your exact date for the trip from you and need your copy of passport, We need 30 % of advance for the booking, can pay by card, bank transfer, online, please check our booking and payment system

I am travelling single, Can I join with other group ?

Yes, this is group joining trip, so all solo traveler can join. Please e-mail us with your preferred flight date. It helps to share cost of Annapurna base camp helicopter tour.

Do you carry oxygen tanks in case of emergency?

Yes, we always have oxygen cylinder for an emergency.