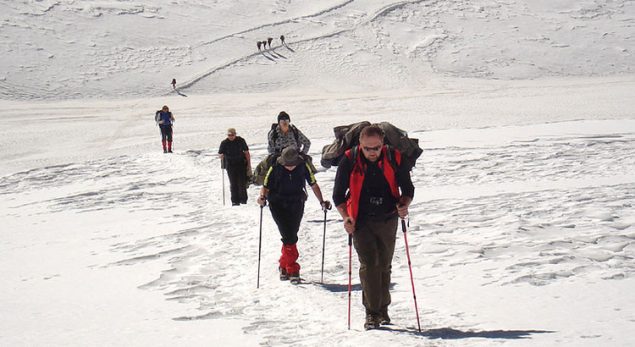 Mt.Dhaulagiri Himalayas stands at an elevation of 8167 meters from sea level lies in Myagdi district of Nepal. The name Dhaulagiri is endorse later before it is Dhavala-giri. This word Dhavala-giri is a Sanskrit name which means White mountain peak. So the world deepest gorge Kaligandaki lies in between Dhaulagiri and Annapurna. And this expedition is first leads the Swiss and Austrian expedition in 1960 from the north east ridge.

This Dhaulagiri is an unique, mound shape trekking lying in the northwest of pokhara. The dhaulagiri height is discovery from Andes in South America in 1809 but Europeans assumes the Dhaulagiri is highest mountain in the world. Before the expedition climbing one should have prepare the acclimatization and ascent climbing preparation of the Dhaulagiri peak. The expedition is an attempt the highest four peaks climbing Dhaulagiri mountain.

It is a difficult and technical to climbing the expedition with high level of Skill. The normal route to climbing the summit is north east ridge with passes 3 camp above base camp. There are multiple routes to climb Dhaulagiri mountain. To succeed the summit, it will passes four camps are the Camp 1 at 5900m, Camp 2 to 6400m, Camp 3 7200m. And Camp 4 at 7500m which is most difficult part of the climb and easily reach to summit.

The expedition journey begins from Kathmandu to Darbang. And you will trek from Phallya Gaon to first Italian Base Camp to Dhaulagiri Base Camp. After that you will passes the three more camp and a final advanced base camp to attempt the summit of Dhaulagiri. After attempting the peak you will achieve the great experience on the top of the summit. And you will trek down toward Jomsom and take early morning flight to Pokhara and back to Kathmandu.

There will be time for us to explore the bazaars, shops and monasteries of this fascinating city. The expedition leader will also examine everyone climbing equipment so that any shortfalls can be purchased in Kathmandu prior to flying to Pokhara.

Our adventure begins with a flight from Kathmandu to Pokhara, where we spend overnight in a nice lodge.

From here we drive to Darbang via Beni. The road from Pokhara is a rough track and from Beni to Darbang is little more than a scar scratched through the valley, which barely permits the passage of motor vehicles. However, the driving it is less unpleasant than walking amongst the traffic and dust and saves a day and a half walking. We camp at Darbang at an altitude of 1,180m.

In the morning we cross the suspension bridge over the Myagdi Khola, the main valley that we will be following towards Dhaulagiri. We leave the world of motor vehicles. The trail initially follows the west side of the river, before crossing a small bridge over the Dang Khola at Phedi, then climbing steeply up a zig zag path on a spur to reach the village of Dharapani. The trail contours through cultivated and populated hillsides, with a lunch break possibly in Sibang, before we choose our campsite at Phallya Gaon for the night at around 1,800m.

Trek for 5/6 hours on steep uphill trail crossing small stream and villages. From the camp you could see the east face of Dhaulagiri 4.

Today walk continues through the forest, a bit like a gigantic natural Botanical Gardens Walk! First we cross the Konabain Khola, and then cross the Myagdi Khola, both on seasonal wooden bridges (interesting!).The path then stays on the east bank of the main valley, reaching Soligari at 3,100m after a few hours.

Cross the Choriban Khola flowing down from the east. The valley suddenly opens up and we begin to see the huge west face of Dhaulagiri 1 and the peaks towering above the west side of the Myagdi Khola. The forest becomes less dense, with more bamboo and eventually after climbing a steep ridge, we come out of the forest altogether and onto the open hillside under the west face of Dhaulagiri 1. This has become known as the Italian Base Camp and will be home for two nights at an altitude of 3,600m.

Spend a rest and acclimatization day to give us a chance to catch up with domestic chores and writing up log books. It is not a bad idea to do a little active pottering exploring the area and living in awe of something like 4,500 meters of mountain overhead - we will be up there in a few weeks!

We have to cross a huge breach in the moraine and the frozen debris of a massive avalanche fan that forms at the bottom of the west face. The initial descent down the moraine slope is very step, so the Sherpas will run a rope out as a hand rail, as much for the benefit of the porters as for the group. Climbing the slopes on the other side is straightforward (if steep); this section could present problems if icy, or if covered in fresh snow. Once in the upper valley, we pass the site of a large bivouac cave, and the sites of the American and French Base Camps. The path is now backing on the west side of the river, and soon leads us onto the Chhonbardan Glacier, which is completely moraine-covered in its lower reaches. At around 4,220m there are platforms leveled on the glacier is surface, which can accommodate our camp for the night. This is quite a short day, but it is important not to ascend at this altitude too quickly.

Another fairly short day, taking perhaps 4/5 hours to walk up the moraine-covered Chhonbardan Glacier to Dhaulagiri Base Camp at 4,600m. Base Camp is really a huge area of the glacier where expeditions have based themselves over the years. Terraces have been leveled on the stony ground and there is a choice of sites. This will be our home for the next five weeks.

We have 5 weeks to climb the mountain. From base camp, the route to camp 1 follows a gully to the side of the Icefall. This is fixed with rope and is one of the steeper sections of the climb as well as being one of the most dangerous. Camp 1 is situated at the top of the Icefall on a broad col. Camp 2 is on a small, flat area below an ice cliff on the eastern aspect of the NE Spur itself. The route above camp 2 is steep for 500 meters to reach camp 3, which is located on a rocky ledge. Depending on the conditions, either the North East Ridge itself, or moderate snow slopes to the rightly are followed to a steep couloirs that leads to the summit.

The path from Base Camp goes along the north side of the glacier. It is flat for a while, and then it climbs a steep bank to eventually follow the crest of a massive moraine ridge to wide, open slopes that lead to the crest of French Col/Pass at 5,400m. It should take 4 or 5 hours to get there. Cairns, prayer flags and wonderful views provide distraction for a rest before descending easy slopes into Hidden Valley, where we find a campsite for the night at around 5,050 m.

From our camp somewhere below Dhampus Pass, we continue along to the west edge of the Kali Gandaki Valley, where we descend to Yak Kharka and then a further 1,000m to the valley floor. It is then an hour walk north east to Jomsom. We then need to make arrangements to fly to Pokhara. In the event of bad weather and there being no flights out of Jomsom, the alternative is to walk, jeep and bus south to Beni. This valley is part of the famous Annapurna Circuit, but a road has been extended to Jomsom, so it is now possible to travel by motor vehicle if uncomfortable

Day 53Fly to Kathmandu via Pokhara

A morning flight to Pokhara, then fly to Kathmandu. We can have a celebration meal out together in the evening.

A final chance to buy souvenirs or perhaps just to relax in hotel.

BB Plan-Breakfast & Accommodation Back to your own final destination

Final transfers to Kathmandu airport to get flight back to home.