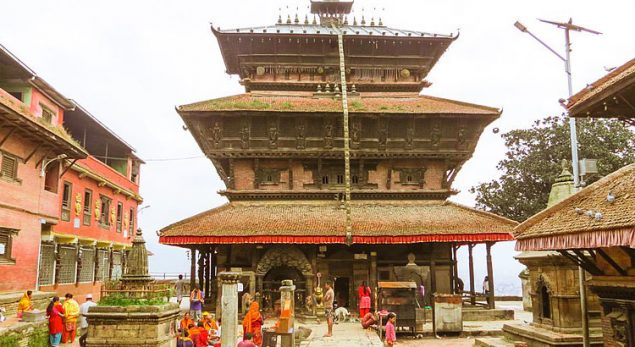 Kirtipur day tour offers an authentic experience of the Newari culture of the Kathmandu Valley. Kirtipur walking tour along its narrow lanes to observe the life of the people. They have lived for many generations as per age-old traditions and beliefs. It also offers an oppotunity to try some Newari food taste as well.

Kirtipur is also the starting point for a day hiking to nearby hills to Champa Devi from where you can get splendid view of the Himalayas on a clear day. Similarly, you could combine the trip to Kirtipur with visit to well-loved Ganesh temple Jal Vinayak in Chobar, and Dakshilkali and Pharping. The pilgrimaage site of Hindus and Buddhist.

Kirtipur locates on a ridge, 8 km southwest of Kathmandu. The ancient Newar township with its brick-paved streets lined with typical red brick houses and tiled roofs, and temple squares is a natural fortress. The Chilamchu Stupa and the temple of Bagh Bhairav are major attractions of Kirtipur tour Kathmandu. It also offer a pretty nice view of whole Kathmandu valley. This is a good day tour for Photograph.

This is a perfect tour provides lively atmosphere, city views and Newari food aplenty. Dakshinkali, Pharping and Kirtipur highly recommends.Kirtipur is in shadow means that not famous like Patan, Bhaktapur and Patan because of lack of advertisement.

In short, tour in Kirtipur is a prime destination to learn about the Newar people. They are one of Nepal’s many distinct ethnic groups and the original inhabitants of the Kathmandu Valley. Join a day Kirtipur tour for exquisite architecture, hilltop temples, and sweeping Kathmandu city views.

Receive you at your hotel in Kathmandu and drive to Dakshinkali, Pharphing and Kritipur tour. These are the best tourism spots of Kathmandu.

Dakshinkali -Dakshinkali is also also good place to visit. Dakshinkali temple, dedicated to Goddess Kali. The name itself composed of “Dakshin” meaning south and “kali” meaning black female. Devotees sacrifice chickens, goats, sheep and many more as an offering to the goddess. There you can see the sakti sect Hinduism activities.

Pharphing - Pharping is also major tourism attraction sites of Kathmandu valley which is 20 km far south of Kathmandu.Pharping is known as the sacred site of Yangleshö, famous for both Hinduism and Buddhism where Guru Padmasambhava attained the level of a Mahamudra Vidyadhara. There are two major practice caves in Pharping blessed by Guru Padmasambhava, the Asura cave and the Yangleshö cave. Wander around the caves and explore the Vajrayogini temple and the monastery around there. It is the holy sites for Buddhist pilgrimage.

Kritipur- Kritipur is one of the oldest newari settlement of Kathmandu valley. It locates on a hill to the southwest of kathmandu. Kritipur offers exquisite architecture, hilltop temples and sweeping Kathmandu city views. The Kritipur town is full of cobblestone streets, old brick houses with carving door and window. Kritipur is the least visited heritage sites by tourist in Kathmandu, and yet it is worth visiting Kritipur.

This is a difficult thing to gauge. We have seen everything from USD 20 to USD 1000 per person for guides and porters. Tipping is not required, but a small gesture of thanks to your guides and local porters. The level of the tip should reflect the level of satisfaction from and personal involvement with your guide. However, we recommend you to spend minimum 10% of your total trip cost for tipping entire local staffs, the ratio of tipping guide and porter will be given to you at the pre-trip meeting in Kathmandu before starting the travel.

According to thee size of your groups, it differs. The vehicles will be small and light so that it can be handled easily and safely through the narrow roads of Nepal. It can be a car, minibus, land cruiser, van, Jeep