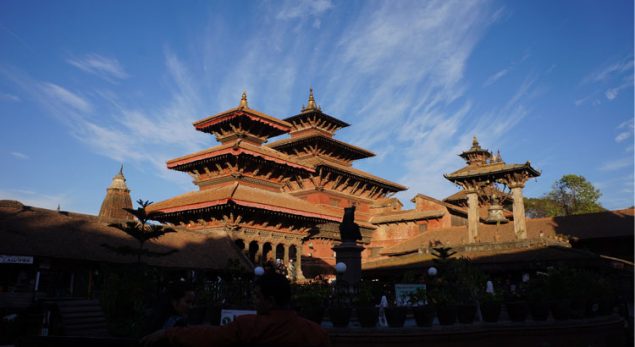 Patan Tour also known as Patan durbar square tour. This is one of the most important world heritage site tour in Kathmandu Nepal. The ancient city of fine arts is just 10 km southeast of Kathmandu.

Patan Durbar Square is the main attraction. You can see the medieval architecture and culture. Patan durbar square is famous for its ancient palace, temples and shrine. Similarly it is also popular for its exquisite carvings. Patan durbar square consists of three main courtyards. The central courtyard, Sundari Courtyard, and other courtyards. The Sundari Courtyard is more beautiful and it holds a master piece of stone architecture.

A widely diverse style temples and Buddhist monasteries scatter around Patan.Durbar square has a collection of temples.  The tour offers the most visually stunning display of Newari architecture. The Krishna, Bhimsen, Taleju bell, Bhai Dega and many other temples gives you an experience about its people faith and respect on religion.  Arts and architecture decorates its temple and monuments which is wonderful.

The fine bronze gateways, marvelous statues, guardian deities and magnificent carvings are amazing. Also the stone carving, metal carving and wood carving are also the hightlights of  Patan tour. It  tells about gorgeous craftsmen and metal workers. Patan known as the city of superb artists. The majority of the citizens follow the Buddhist faith.

Patan day tour combine with Bungmati and Khokana village tour. We receive you at your hotel with car and driver in the morning. Similarly, our tour guide will explain you about its culture, religion and heritage of the city. After Patan tour, we will again drop you back to your hotel.

Patan tour highly recommends for anyone if you a spare day in Kathmandu. We are ready 24 hours a day for your kind help and assistance for Kathmandu tour.

Receive you at you at your hotel and drive to visit Patan city of fine arts. Patan is better known as "The city of a thousand golden roofs." Once separated from the capital, Patan and Kathmandu are now separated only by a bridge over the Bagmati River. The city of Patan has recovered its label of origin "Lalitpur". The historic heart of the city is entangled with narrow streets and theatrical decoration-brick houses with carved wooden balconies and bronze decorations, patios and backyards that house oratories, temples. The city is famous throughout the country for its tradition of blacksmiths and goldsmiths. Artisans model effigies of the divinities of the Hindu and Buddhist pantheons. The city has more than 50 main temples, some of which were destroyed or damaged by the earthquake of April 2015. Many stupas, chaytyas and bahal-ancient Buddhist monasteries bear testimony to the long history of Buddhism in the city that remains today a Bastion of Newars Buddhism in the Kathmandu Valley. The four stupas erected in the four cardinal points, originally defined the city. They were erected during the reign of Emperor Ashoka some 250 years before our era. The sightseeing points in Patan are Patan durbar square, Golden Temple, Kumbeshwor temple, Mahaboudha and Rudrabarna temple.

Lunch in Patan after Patan tour, we continue to the Bungamati Village which is a 6th century village within the Kathmandu Valley. There you will see the Shikara-style temple of Rato Machhindranath ringed by the traditional houses where the villager still follow a traditional lifestyle and engage in traditional occupations. Bungmati is the living museum within the Kathmandu Valley which preserves the prosperous legacy of arts and civilization of the ancient and medieval Nepal. Other sights to visit around village are Bungamati Culture Museum and Dey Pukha- the central pond.

Not far from, Bungmati lies another small traditional Newari Village - Khokana which is another living museum. This village has its own incredible history and has the most authentic Newari culture that has been preserved here in every house since the medieval era. Most of the households in Khokana depend on farming and traditional occupations like woodcarving. You will see women spinning traditional wool-wheel (charkha) to weave the wool and men carrying kharpans (the circular boxes joined by a bamboo and stringed down to air to put their farm products inside it.

Where can I store the unnecessary items that is not required for Trekking/hiking/travelling?

This is a difficult thing to gauge. We have seen everything from USD 20 to USD 1000 per person for guides and porters. Tipping is not required, but a small gesture of thanks to your guides and local porters. The level of the tip should reflect the level of satisfaction from and personal involvement with your guide. However, we recommend you to spend minimum 10% of your total trip cost for tipping entire local staffs, the ratio of tipping guide and porter will be given to you at the pre-trip meeting in Kathmandu before starting the travel.

According to thee size of your groups, it differs. The vehicles will be small and light so that it can be handled easily and safely through the narrow roads of Nepal. It can be a car, minibus, land cruiser, van, Jeep.