Pokhara mountain flight tour also known as ultralight flight in Pokhara. Ultra flight is a challenging adventure flight that offers spectacular view of the mountain, valley and scenic lake. Also enjoy the beautiful scenery of green forests, meadows, river, and a closer views of ever glowing and shining mountains when flying through the blue sky in a micro ultralight flight. Pokhara Annapurna mountain flight tour highly recommends to fly like a birds in the Himalayas. 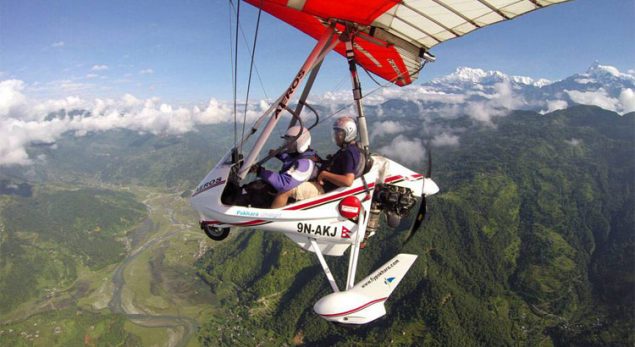 Annapurna mountain flight tour operates from Pokhara early in morning. The flight is around 30 minutes with a guaranteed window seat. During the course of flight, you will witness fantastic Himalayan peaks, lakes and glaciers of various peaks in Pokhara.

While flying, you can see Mt. Annapurna, Mt.Dhaulagiri, Mt. Machhapuchhre (Fishtail), Mt. Lamjung and Mt. Manaslu. The first one to come to view is Mt. Dhaulagiri, a seventh highest mountain in the world with an altitude of 8,172 m. After Dhaulagiri, you can have magnificent views of Annapurna I (8,091m) and Machhapuchhre(6,993 m). Moving on, further sights of Annapurna III (7,555 m), Annapurna IV (7,525 m) and Annapurna II (7,939 m) can see respectively. Your mountain flight experience ends with an extremely beautiful panorama of Lamjung (6,932 m) and Manaslu (8,163 m).

The Annapurna Experience mountain flight flies over Pokhara valley. The close encounter to the Himalayas will surely give you an amazing life time experience. As the flight operates from Pokhara and flies over the top best mountains in Pokhara, it is so called Pokhara Mountain Flight tour. We provides Pokhara mountain flights departures every day, early in the mornings, when the Himalayas views are the best.

The best flight tour offers breathtaking view of Pokhara Valley. Similarly, the flight classify into four types that is open aircraft, glory of Mt. Fishtail, Mountain sky trek, and in heart of Himalaya. The flight time are varying. The flight of open aircraft is 15 minutes, and glory of Mt. Fishtail is 30 minutes. As mountain sky trek takes 60 minutes and heart of the Himalaya completes within 90 minutes. And the flight takes off and landing at Pokhara airport. The maximum altitude attain is 5000 ft. Pokhara flight tour covers all the view of Annapurna, Fishtail, Manaslu and other Himalayan range as well whole Pokhara valley.

Hence, the flight starts around 6:30 to afternoon 6:00 pm. As the aircraft has only two seat for pilot and passenger and once you stay the window will not open until. Hence September to May is the best time of year for Annapurna mountain flight tour in Pokhara. The flight operates only if the weather is clear. Ultra flight tour highly recommends adventure trips in Pokhara. You will get a great experience and make good memory once in a life time. Once is not enough due to its great and challenges adventure in Nepal. Many domestic and international tourist are influencing for this activities.

Early morning you will pick up and transfer to the domestic terminal Pokhara for the Ultra flight. The flight begins at 6:00 AM to 8:00 AM. While you are flies over the top, you will view the fantastic Himalayan peaks, lakes and glaciers within 30 minutes flight with guaranteed window seat. You will view the stunning Himalaya, dense forest, and Pokhara Valley. The trip will complete and landed on the same Pokhara terminal. After that you will drop to your hotel.