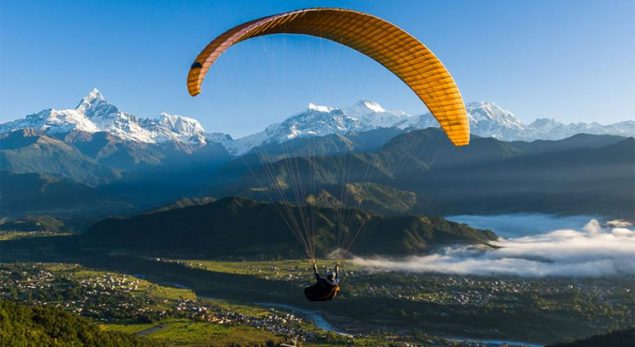 Pokhara Paragliding Tour is an adventure day tour to experience life in air. Pokhara paragliding flight tour gives you a sense of free flying in the air. The day paragliding tour in Pokhara explore the views of surrounding mountains range, green hills, white clouds, and blue lakes. Paragliding in Pokhara is a great way to enjoy landscapes and series of towering mountain peaks from sky.

Pokhara is the top destination in the world for paragliding tour. So, Pokhara  has a safe landing and taking off point. There is no any risks Paragliding in Nepal. The guide and pilots, well trained and experienced as they know about the local weather condition and Himalaya. The pilots know the direction and proper information of the mountain during Paragliding in Pokhara.

The paragliding flight takes off at Sarangkot at 1,592 m high and fly over the valley and breath-taking view of beautiful villages and green forest. Return back to main office in lakeside. The short flight take 25 to 30 minutes where you will share the sky environment.

The paragliding flights are  at 9:30 am, 11:00 am and 1:00 pm around. So you can make this trip as your time schedule. The season and weather condition is more sensitive for paragliding flight. The best season are Autumn between September and December, Spring between March to June and Winter between December to February. Pokhara Paragliding flight tour is suitable for beginners and all..

Pokhara Paragliding package includes both way transportation, short flight and  photo/video DVD. Age factor is determine to perform this flight. Below 18 year will not allow if want to do , need their parent/guardian during the trip. If you have no time for paragliding in Pokhara, then it is also possible now paragliding in Kathmandu.

We drive up to the flying location that is most suitable for the current weather conditions. There are a few excellent take off points around Sarangkot, which gives you an opportunity to enjoy the superb views of the area and us the flexibility to choose a suitable location depending on the weather so your chance of flying is higher. Once we are at the take off site we do a briefing during which we take you through the details of the flight and explain about the equipment and safety procedures. After a safety check, we’re ready to take off so we run a few steps down a gentle slope and it’s time to sit back and enjoy your flight. Depending on your desire, abilities, the weather conditions and the area where we fly, your instructor might let you handle the controls during the flight. If you just want to relax and admire the scenery, that’s OK too, the main objective is to have a good time. You will fly from almost 20 to 30 min depending on weather condition.

Departure Point
Traveler pickup is offered
One of the hotel located in Lakeside ,Pokhara
Departure Time
8:45 AM, 11:00 AM, 2:00 PM

Confirmation will be received at time of booking
Not recommended for pregnant travelers
Not wheelchair accessible
No heart problems or other serious medical conditions
Refunds will not be issued if tour/activity is missed due to late or non-arrival of flight
Not recommended for travelers with back problems
Most travelers can participate
This is a private tour/activity.
Only your group will participate