Dakshinkali Pharping Kirtipur Tour is day tour to Dakshinkali Temple, dedicated to Goddess Kali. Pharping is 4km away from Dakshinkali Temple, famous for a Buddhist Monastery named Drolma Lhakhang and visit more monasteries in Pharping, only if you are interested. Kirtipur is a historic town which has many things to offer like old shrines and temples, old settlements, and old houses. The people here typically dress in old traditional costumes, and you will see many locals working on ancient looms. The Chilamchu Stupa and the temple of Bagh Bhairav are major sights Kirtipur, also offers a great views of Kathmandu valley from the Shiva Parvati temple. This is a great day tour in Kathmandu for all. We departures Dakshinkali Pharping Kirtipur day tour throughout the year. 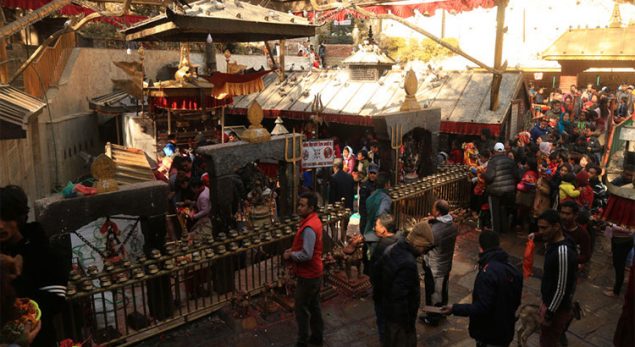 Dakshinkali Pharping Kirtipur tour is a perfect day tour in Kathmandu. You will discover the animal sacrifice ceremonies, Buddhist monastery and the historical old town. This day tour is famous for Hindus and Buddhist. This is a good day tour to experience the cultural difference in Nepal.

As, Dakshinkali lies 45 km far from Kathmandu. It is a famous shaktipeeth for Hindu religion. Huge crowd of devotees visit this temple for blessing. Animal scarifies on every Saturday and Tuesday. This temple is infamous for blood sacrifice of animals.

Similarly, Pharping is a scenic area to view the green forest. It also known as home to Buddhist monasteries and the cave of Guru Padmasambhava. Connect with the legend story of Guru Padmastambhava enlightenment. We can still see his handprint  in the stone near  the entrance. You can see a glimpse of different architecture of Buddhist shrines that can not find in Kathmandu city. It is also possible to do short hike from Dakshinkali.

Besides, Kirtipur is the oldest newari town of  Kathmandu Valley. It perch on the hill above and habitat of newar. There is a wonderful sense to the impressive medieval temples along its backstreets. It is a home of the historical Chilancho Stupa, the century old Baghbhairab temple, and Uma Maheshwor temple. You can encounter the newari cuture, food and lifestyle on Kritipur tour.

Your day trips begin after breakfast and guide will picking you at your hotel. The first destination is Dakshinkali, on the way you will pass Tribhuvan University, the most famous university of Nepal. After that you will pass through Chovar Gorge from where the water from Kathmandu valley drains out and Taudaha Lake, a sacred lake of Nepal. The drive will take you to Dakshinkali within an one hour. You will tour in Dakshinkali Temple afterwards, take a short walk to nearby Pharping Village, where you will tour monasteries and meditation caves. From Pharping you will drive to Kirtipur where you will see the Bagh Bhairav temple, Uma Maheshwor temple, and Chilancho Stupa. Finally, you will drop off at your hotel around 5 to 6pm.