Lobuche peak is a strenuous climb in Everest. The Lobuche is a beautiful mountain ideal for those people who have been on expeditions such as Kilimanjaro and Elbrus. Learn introductory mountaineering skills and climb the Himalayan trekking peak of Lobuche East, a great introductory climb. The Lobuche Peak is a tough trek and climb. It is meant to be challenging. You must be a fit and regular hillwalker to take part in climbing Lobuche peak. Trek to Lobuche peak with our experienced and friendly strong Sherpas. We cater Lobuche Peak climbing package cost and group departure dates 2021/22/23/24/25. 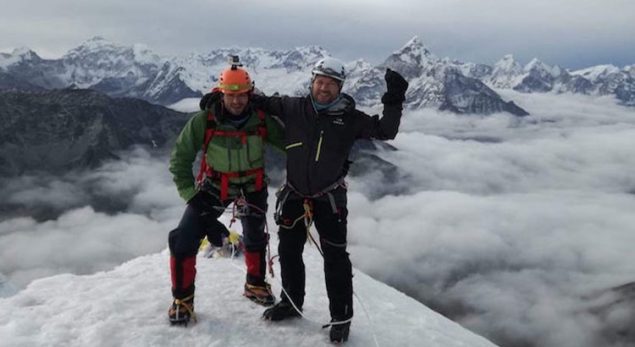 Lobuche is a challenging peak climbing in Nepal. This is a perfect trip to experience the challenges of snow-capped mountains. The Everest Base Camp Trek and climb Lobuche peak offers a breathtaking view of Himalayan nature. The Peak has two summits Lobuche East and Lobuche West. We trek to the base camp of Lobuche peak, exploring traditional Sherpa villages, monasteries and alpine arctic terrain woodlands to moraine and glaciers.

Lobuche is technical peak to climb and you need a good capacity to endure. So, technical skills like using ice axe, and rope is necessary.  Also an expert climbing guides will take care and precaution especially to climb the summit of Lobuche peak.

The Lobuche  Peak trek starts from Lukla and walk to high camp.  On the way you will enjoy panorama and stunning views of Everest and Amadablam. We also continue trek to Everest Base camp and get an opportunity to view magic view of Everest from Kalapatthar. The Khumbu Glacier is an extra attraction of the trip, and terrific views of  exotic flora and fauna.

From the summit of Lobuche peak offers breathtaking view of Amadablam, Pumori and Everest. The once in a lifetime trip is loveable and wonderful. Autumn from September to November and Spring from March to May are the best season climbing Lobuche peak.

We will meet you at the airport on arrival to Nepal. We wait you thee with your name and take you to your hotel. Briefing in the afternoon. Overnight Kathmandu

Your first day in this famous city will be spent touring major temples and sites. It will be a unique and fascinating beginning, and our schedule will be relaxed enough to allow for trekking preparation. Overnight Kathmandu

This spectacular mountain landing strip is the gateway for expeditions, trekkers and Sherpa people to the Everest Region. You will be transported from Kathmandu to a bright and colourful scene in clear mountain air. It will feel good to stretch your legs, stiff from days of travel, as we walk downhill to the village of Phakding, along the Dudh Kosi River. Times have been good in the area recently and the trail is full of new Buddhist art, prayer flags and small monasteries. We sleep tonight with sounds of the roaring glacial water of the Dudh Kosi in the background. Overnight at Phakding

Today we hike along the Dudh Kosi, entering Sagarmartha National Park just before lunch. In the afternoon, we climb the notorious Namche Hill, our first real taste of ukalo, the Nepalese word for uphill. With some luck our first view of Everest will be on the way up the hill. Mid-afternoon we enter Namche Bazaar. Namche is small, scenic beyond belief, and surprisingly cosmopolitan. A mixture of Tibetan traders, tourists from around the world, expedition climbers, proud Sherpas, monks, Nepalese civil servants, dust, mud, colorful costumes and yaks. Overnight at Namche

Namche will be our home base for this trip. We will return here at the end of the climb. We stay indoors in a classic Sherpa style lodge, one that has been a center of many of the expeditions. Before breakfast we usually take a 10-minute walk to the National Park overlook just above our lodge. The views of Everest, Ama Dablam and Lhotse are exciting and promise much about the adventures ahead. Overnight Namche

We trek to Thame .This walk takes us away from the main corridor of travel towards Everest Base Camp. At the same time it takes us toward the home of many of the most accomplished Sherpa Everest Climbers. Tenzing Norgay is from Thame. We will stay in the family lodge of good Sherpa friends. Overnight at Thame

In the morning we hike to a ridge above town to visit the Thame Monastery. Perched high above the village is a classic Himalayan monastery. In the afternoon we walk to Khunde. Overnight at Khunde.

Today we hike from Khunde to Tengboche where we will visit the famous Tengboche Monastery. At Tengboche we will gaze up valley toward the plume blowing off Sargamartha - Everest. We then make our way to Pangboche and stay at Pangboche.

A classic hiking day of the Khumbu. Ama Dablam still rises above us and we watch its shape change as we walk up the valley and see it from a different perspective. Our goal for the day is Pheriche at 4266m home of the Himalayan Rescue Association clinic. Pheriche is in the shadow of Everest Base Camp. Yak trains returning from Base Camp make their first overnight stop here. Overnight at Pheriche.

We awake to awesome mountain views in this cold valley. Tawache Peak towers above the town. Kantega is sunlit and sparkles to the south. In the other direction we see Lobuche Peak and Cho Oyu, at the border of Tibet. We return from early morning photographs to our warm lodge. Today is an acclimatization day. We will sleep a second night in Pheriche. We might attend the Himalayan Rescue Association altitude lecture, or hike up over the ridge to the village of Dingboche. Overnight at Pheriche

Today we walk up onto the Khumbu Glacier. The lateral moraine of this famous glacier is visible as we walk out of Pheriche. Distances are short now, but each step is measured and deliberate as we move higher in the thin air. We take a break for tea and a trekking style lunch at Thukla. In the early afternoon we climb the moraine past the Chortens that have been constructed for Sherpas lost in expeditions over the years. Cholotse Peak and Lobuche Peak loom above. Overnight at Lobuche (4816m).

Each day the distance we trek is shorter. But our walks are more measured and slow, in part due to thin air, in part due to the ice and ruble of the massive Khumbu Glacier and all the photographs we will be taking. We arrive at Gorakshep at 5120m. This old seasonal yak grazing area has become the last outpost before Everest Base Camp. Surprisingly close is at 5639m foot top of Kala Pattar, the famous mountain known for its views of the top of Everest and Base Camp. We will climb up with our Sherpas in the afternoon for photos. Overnight at Gorak Shep

Today we visit Everest Base Camp (5334m). This is the day we get a small taste of what an Everest climber life is like living at Base Camp and above for many weeks. You will feel the challenge as you hike up the glacial moraine towards Base Camp. It will not feel much like the movies when you get there. The challenges of living at altitude will be very tangible. Everest Base Camp is a famous but temporary habitat among the glacial boulders and ice of the upper Khumbu Glacier. The full mass of the Khumbu Icefall will not be viewed until you walk into Base Camp, but the creaks and groans of the glacier and the roar of avalanches from the slopes around will be heard during the entire day's hike. We return to our lodge at Gorak Shep with memories that will last a lifetime. Overnight at Gorak Shep

Day 14Trek to Lobuche Base Camp

Today trekking destination is beautiful base camp for Lobuche peak. This is one of the most spectacular camping locations in the Khumbu at 4,816m. Overnight Lobuche Base Camp.

Trek up to a high camp and it should take us about four hours to climb up and some snow to the site of high camp. We are set on a small expanse of snow or rock, above a deep, blue lake and close to the mountain. Here tents are shared so as to keep the load numbers down and it’s early to bed for a very early alpine start.

An early start at around 2.30am, climb the south East Ridge, which is a mixture of moderately steep snow and ice. Where necessary, we fix ropes along the route. We ascend steadily to a plateau at around 6000m, and then traverse around to an exposed ridge, which we will follow to the summit slopes. Approximately six hours of steady climbing brings us to the far eastern summit. From here it is a steady climb along the summit ridge towards the east summit, which for us marks our summit. The main summit is not far in distance but requires some technical climbing which is normally beyond the ability of novice climbers, certainly in terms of the time it would take. This final section of the climb is not for the faint-hearted, as there are huge drops on both sides, so this section will definitely be fixed with a rope. From the top we are well rewarded with superb views across to Ama Dablam , Makalu, Lhotse, Everest, Nuptse, Changtse (in Tibet) Pumori, Gyachung Kang, Cho Oyu and the myriad peaks to the west and south. After a full day climbing, we retrace our steps back to High Camp, pack up, then with weary legs head down to base camp. The day climb could be anywhere between ten and fifteen hours, depending on conditions and our progress.

Today has been a set aside as a contingency day.

Day 18Trek back to Pangboche

In a long day we return to Pangboche for showers, a great meal and a good night sleep in a bed. Overnight at Pangboche.

Day 19Trek from Pangboche to Namche

This town always has friends to visit, things to do. We spend another relaxed day here to take it all in. Overnight at Namche.

Trek down to Phakding for 4/5 hours and overnight at Phakding.

At Lukla in the evening we have a party with our Sherpas and staff. Overnight at Lukla

Day 22Flight from Lukla to Kathmandu

Morning fly back to Kathmandu and spend free day in the afternoon. Overnight at Kathmandu

Final departure transfers to airport to get flight back to home